Steiff (Germany) – 1880 – THE BEGINNINGS OF A FAMILY COMPANY the official date of foundation of Margarete Steiff GmbH. The “Elefäntle” developed into the company’s first big-selling product. Her younger brother, Fritz, successfully sold the felt elephants at the nearby Heidenheim market. Six years later, Margarete had sold over 5,000 elephants. At this point, Margarete also designed other fabric animals.

1902 – BIRTH OF THE TEDDY BEAR Richard designed “Bear 55 PB”, the world’s first toy bear with jointed arms and legs. While looking for a suitable material for the fur, Richard found the cuddly and dye able mohair plush, manufactured by the Schulte pile-fabric weaving mill in Duisburg.

1980 – 100 YEARS OF DREAMS IN FABRIC AND PLUSH The Margarete Steiff Museum – predecessor of today’s “Die Welt von Steiff” Adventure Museum – opened in Giengen to mark the 100th anniversary of the company. At this time, Steiff also began producing limited numbers of replicas for Steiff enthusiasts.

The most expensive teddy bear ever sold at auction is the Steiff 1904 ‘Teddy Girl’ bear. It was sold at Christies in 1994 to Yoshihiro Sekiguchi, owner of the Izu Teddy Bear Museum in Japan, for £110,000.

The bear was originally bought in 1904 for Colonel Robert “Bob” Henderson on the day that he was born. 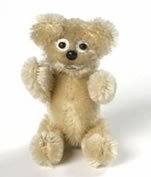 Schuco (Germany) – In 1912 partners Heinrich Muller and Heinrich Schreyer began their own business under the trading name of Schuco.  This company was mostly famous for its magnificent tin toys which were of super high quality and design.   The war years hampered this company’s production and at the war’s end Schreyer left the company and Muller started again with a new partner, Adolph Kahn.  By the mid 1920’s their most enduring fabrications emerged.  Their famous teddy bear was called ‘Tricky’ whose head nodded yes/no, being operated by a tail leverage.

Schuco was one of the very first companies to produce teddy bears for the adult market and this was done by producing teddy bear perfume bottles and teddy bear compacts.  These teddy bear items are hugely sought after today.    Schuco also produced the famous Bellhop Bear in 1923.  The Bellhop Teddy Bear is fully jointed and wears the clothes of a hotel Bellhop Boy, once again the bear’s tail operates his moving head.  This bear also has a squeaker in his chest.

Bing (Germany) – Gebruder Bing had been making domestic tin ware items since 1865 and later they produced enamelled and clockwork toys.   Bing produced their first Teddy Bear in 1906, so they started Teddy production not long after he was created by Steiff.  As well as producing some wonderful Teddy Bears, this firm also produced some very high quality clockwork and mechanical toys.  Initially Bing Teddy Bears had a metal clip in their ear which was imprinted with the initials G.B.N. Bing Nurnberg), however, in 1909 Steiff took action to prevent  the then, probably largest toy manufacturer in the world, from using a button-in-ear trademark.  Steiff did allow Bing to use a button on the side under the arm, this button was also marked G.B.N. until 1919.   From 1919 until the company finished production in 1932 the initials were simply B.W. (Bing Werke).

In 1915, Bing produced a Skating Teddy Bear and a Walking Teddy Bear.  The Walking Bear had a large key in his belly that operated his walking mechanism.  Bing also produced a tumbling teddy bear as did Schuco and Steiff.

Gebr. Hermann K.G. (Germany) – The Hermann Family has been making wonderful Teddy Bears since 1913.  Bernard Hermann started the industry in Sonnenberg, Thuringia.  In 1948, two of his four sons, Artur and Werner, started a new Hermann enterprise in Hirschaid (a small town by Bamberg).  To this day Hermann still produce wonderful Teddy Bears of great quality.  One of their highest priorities is that of customer/company relations and this company is always very willing to talk about and answer all questions on their company or their products.

Hermann Spielwaren GMBH (Germany) – This company is an offspring of the original Hermann Company.  This firm has only been in business since 1979 and care must be taken not to confuse the two.  Recently, Hermann Spielwaren has made some great teddy bears that are themed such as Captain Smith of the Titanic and a Malcolm Campbell Bear, their quality and desirability is extremely high, if you are looking for this kind of Teddy Bear.

The Ideal Novelty & Toy Co. (U.S.A.) – This company was the first company in the United States to produce Teddy Bears, it’s roots going back to Morris and Rose Michtom, who transferred the cartoon Teddy Bear that appeared in The Washington Post to a loveable and huggable Teddy Bear.  Ideal did not use permanent tags or labels on their teddy bears in the beginning, but these teddy bears are very distinguishable.

AETNA (U.S.A.) – This company was only in business for about two years from 1906.  Their label was stamped on their foot.

Knickerbocker (U.S.A.)  –  This company began in 1850, the first Teddy Bears being produced in 1920.  This firm experienced sale, bankruptcy and new ownership.  Many of Knickerbocker’s early teddy bears can be found with their labels still intact to this day.  The company was originally based in New York but later moved to New Jersey.  Although this firm no longer exists, it is still famous for its Smokey Teddy Bears, produced in the 1960’s – 1970’s.

Pedigree (British) – Pedigree had factories in both England and Ireland.  Sadly, however, they went out of business in 1988.  Pedigree Soft Toys was a subsidiary of Lines Brothers Limited, once Britain’s largest and most successful toy companies.

Dean’s Rag Book Company (British) – Deans Rag Book Company started in 1903, in fact it is Britain’s oldest existing soft toy company.  It was originally famous for producing cloth cut-out sheets of soft toys.  Deans started to produce teddy bears in 1915.  One of their most famous of their teddy bears being a bear called ‘Bertie’ who was created at the height of their success.  Deans began their manufacturing in London and later moved to Wales, recently they have moved again, this time to Herefordshire.  Their labels are made of cloth and they are quite distinctive.

Ark – South Africa – A Durban industrialist, Mr Aaron Jacobs  together with George Weir established the teddy bear industry in South Africa.
A small plant which was called Ark Toys was set up at Escombe in 1951 and since then has sent out hundreds of thousands of teddies all over the world.

The teddies produced were of a very high standard, mohair came from Britain, the eyes, growlers and squeakers came from Germany, the kapok from Ceylon and wood wool from South Africa.
The range covered golden teddy bears, panda and koala bears through varying sizes up to the big teddy, which was 1 metre high, yet weighed only 1.4kg.In 1970 George Weir sold the business to Prima Toys Pty. Ltd. a toy company based in Cape Town

Invicta –  Invicta Toys was founded in 1935 by two former employees of J.K. Farnell, G.E. Beer and T.W. Wright who was a director and sales representative at Farnell. They operated out of a factory at Park Royal Road in North West London and produced a large range of wheeled and traditional teddy bears and soft toys including animals on wheels, bears, dogs, cats, monkeys and much more. Three of the more popular Invicta teddy bears were Teddy, Sammy and Grizzlie. They ceased production of the animals to produce military equipment and weapons for World War II. After the war, they started to produce bears for export. Mr. Beer retired in 1954 and the company shut down.

William J Terry –circa 1913 Along with J K Farnell, William Terry was one of the first English Teddy makers.

Helvetica  In 1928 the US trade magazine ‘Toy World’ reported that Helvetic held the exclusive manufacturing rights to teddy bears with squeeze-operated music boxes. However, there is no evidence that such a factory existed, and it is increasingly likely that several toy manufacturers made the bears, with only the music boxes stamped ‘Helvetic.'”…along with a photograph of two “Helvetic” bears, one of which wears a clown hat and ruff and another is lilac in color, they write, “Several musical bears have appeared on the market with the distinctive bat-wing nose stitching seen on these two bears, so it is likely they were made by the same maker. Common features include the short velvet paw pads and long narrow foot pads cut lightly on the cross, glass eyes, and the absence of a mouth.”

Today, many companies are having their bears manufactured in China under their own label. i.e. Gund, Buwoski, Russ.

OOAK ( One of a kind) teddy bears are being made around the world by “Teddy Bear Artists” Many of these bears are for sale from shops, via exhibitions, EBay, and directly from the designing artist. Artists are also being commissioned to create and design for well-known brand teddy bear companies.